I don't know about at your house but here it has been RAINY!  On Friday I could see a big black cloud as the bell rang at school so I packed my stuff up really quickly and headed out of there in an attempt to get the kids from school and be home before it hit.  It was  good plan because the storm was behind me so there was a good chance of me beating it.  UNTIL I hit Bellmere Rd and saw another storm on the other side of me.  So I raced into school, grabbed the kids (which took forever because of Nathan's broken leg) and took off for home.  I did stop at the local store for bread.  I was lucky to get home, within 5 minutes the storm hit and it was one of the worst we have seen since we lived at our house.  The water was like a river (and it all fell in about 30 minutes).  Here are some photos. 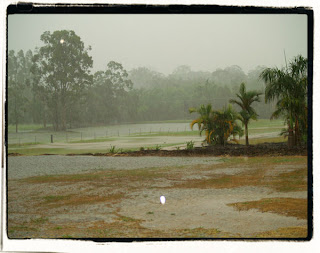 This is the view from our front door. 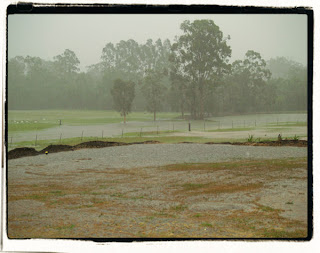 Our dam actually finished at the large gum tree, off centre to the right but you can't even see that in this photo, the paddock is just like one long dam! 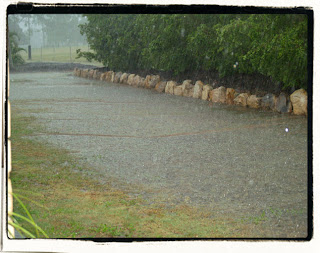 This is out the side of our house.
Amazingly, this had all dried up about 2 hours later!
On another note, I had my first day at home with two kids at school today.  It was so quiet.  At times I wondered what to do with myself.  I did get some school work done, I did some sewing which I will share tomorrow and I got to watch the last episodes of Desperate Housewives and Brothers and Sisters before they start again tonight.  I ate in peace, got to fold the washing without interruptions.  Isn't it amazing how much more you get done in your day when you are not interrupted all the time?
See you tomorrow with some sewing I did today and something really cute that we did on the weekend!
Emma has had a fabulous week at prep, she had role played it all out (and is in fact role playing it out right now), making being organised posters and helping all the little preppies have their hats ready for play.  So cute!  I hear her calling her school kids 'darling' before.  A nice change from the yelling we are used to!
Have a great Monday night!
Posted by Debbie at 6:18 PM