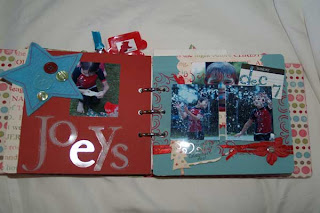 The next couple of pages of my album are dedicated to Nathan's Joey Scouts Christmas party. I used a transparency that was already printed as a centre page and just backed photos that are the same size on each side. You can see I have the top of the frame missing on the page below, I made a mistake with the slice but found a way to use it anyway. 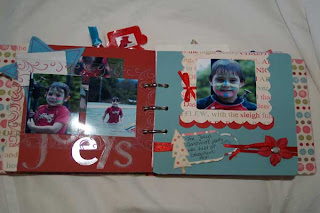 The next three pages are our letters to/from Santa. I forgot to take photos or keep copies of the letters my kids wrote to Santa. I had to make do with just journalling about it on the pink mini page and then I included envelopes, one for Emma, one for Nathan which I put the letters in that they got from Santa. The envelopes are really plain but I like them that way. I used the Slice to cut a scalloped edge circle and then added their initial with Making Memories Alphabet stickers. The paperclips are really just to keep it sealed. 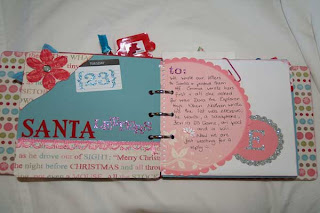 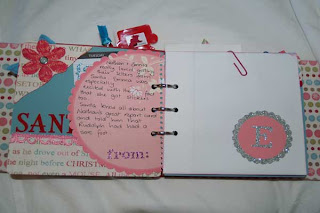 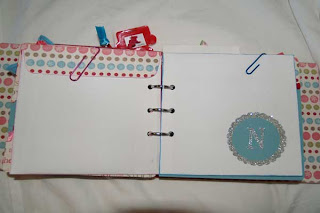 Only Christmas Eve and Christmas Day to go now! Will post them in the next few days although I have to admit that I haven't finished the Christmas Day pages yet.
I am actually in school mode now and have started preparing all my resources for this year. I think scrapping will probably take a back seat for the next few weeks.
Nathan and I went to the movies today and saw Bedtime Stories, I really liked it. We wanted to see Bolt but it wasn't on until after lunch and we were there at 10am. We are going to see it next week.
Emma had her first day in the pre school room at the Day Care Centre today. She was very shy and didn't want me to leave this morning which is very unlike her. She had a great day once I had gone though. I did get a call at 2.30pm to pick her up because she had a temperature. I don't know what is going on with her, she starts the day fine and by the afternoon has a temp but is not really sick, just tired. Anyway she came home and after Panadol she is back to her old self again.
Made Zucchini Slice with my huge home grown zucchini last night, we are having it for dinner tonight with salad, lets hope it's good! Actually when I was making it, Emma was mixing it for me and accidentally tipped a huge amount of salt in it. It was rock salt and I think I managed to scoop it all out but who knows, so disaster could be looming!